Muslim leaders from around the world have taken part in an unprecedented trip to Germany and Poland to see and hear for themselves about the horrors of the Jewish Holocaust.

The 11 imams, sheiks and religious teachers from nine countries met a Holocaust survivor and Poles whose families risked execution to save Jews from the Nazis, in the Polish capital’s Nozyk Synagogue as part of the tour.

They have been around museums, including the recently opened Museum of the History of Polish Jews on the site of the former Jewish Ghetto in Warsaw. And they also visited the Auschwitz and Dachau concentration camps.

Child Holocaust survivors to be compensated

Germany recognizes and will provide compensation to Holocaust survivors who were children during the war, for their “lost childhood,” the Center of Organizations of Holocaust Survivors in Israel announced this week.

The move was the result of negotiations recently held in Jerusalem between representatives of the Claims Conference as well as heads of NGOs dedicated to survivors and a senior delegation from the German Finance Ministry.

The survivors concerned include those born between January 1928 and May 1945, for whom the first period of their lives would have been under the Nazis or allies of the Nazi regime.

Free speech advocates in America have slammed a call to ban The Diary of a Young Girl by Anne Frank from schools in Michigan because it contains “pornographic” passages.

A mother of a seventh grader in the Northville school district in Michigan said late last month that Frank’s depiction of growing up in hiding as a Jewish teenager during the Holocaust, which has sold millions of copies worldwide, contains “inappropriate material”. She pointed in particular to a passage from the “definitive” version of Frank’s diary – which includes around 30% of extra material left out of the original 1947 edition by Anne’s father Otto – in which the young girl discusses her anatomy. 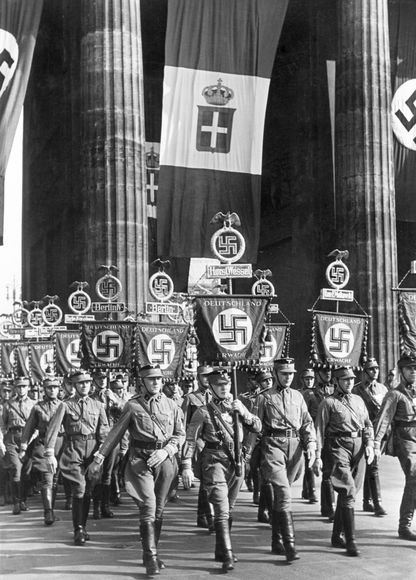 You can’t hide from justice forever—not even for war crimes committed decades in the past, and not even when you’re 93.

That message resounded loudly this week as Germany announced the arrest of Hans Lipschis, age 93, for complicity in mass murders that took place at the notorious Nazi death camp of Auschwitz-Birkenau, where he served as a guard in 1941-1945. Lipschis—who says he worked as a cook at Auschwitz—is the first to be charged from among a list of 50 former Auschwitz guards that the country’sCentral Office of the Judicial Authorities for the Investigation of National Socialist Crimes plans to probe.

Filed under Holocaust in the news, Uncategorized

A controversial production of a Wagner opera at one of the major German opera houses has been cancelled because of harrowing scenes involving Nazis.

The Rheinoper, based in Dusseldorf, said some of the audience had to seek medical help following early performances of Tannhauser.

But the producer “refused” to tone down the staging, set in a concentration camp during the Holocaust.

Filed under Holocaust in the news, Knowledge entries, Other primary sources (not Yiddish)

Australia has made a Swedish diplomat who helped save tens of thousands of Jews from the Holocaust its first honorary citizen. Raoul Wallenberg was a diplomat in Nazi-occupied Hungary, and provided Jews with protective passports and shelter in diplomatic buildings. Many of the people whose lives he saved later went on to live in Australia. The fate of Mr Wallenberg, who was detained by Soviet troops in January 1945, is unclear.

Iby Knill vowed she would tell the world what she had seen at Auschwitz. And now her story will forever be told at museums across Europe thanks to a young filmmaker from Teesside University.

A woman who was born at Mauthausen concentration camp is returning to the site on the 68th anniversary of its liberation. Eva Clarke, 68, grew up in Wales after her widowed mother remarried and the family moved to the UK in 1948. She has contributed her Austrian-issued Mauthausen birth certificate to a time capsule for the camp’s museum.

Hungary’s far-right Jobbik party has staged a rally in central Budapest in protest at the capital’s hosting of the World Jewish Congress (WJC) on Sunday. Several hundred supporters took part, despite attempts by the government to prevent it going ahead. Jobbik said the rally was a protest against what it said was a Jewish attempt to buy up Hungary. The party, which says it aims to protect Hungarian values and interests, is the third largest in parliament.