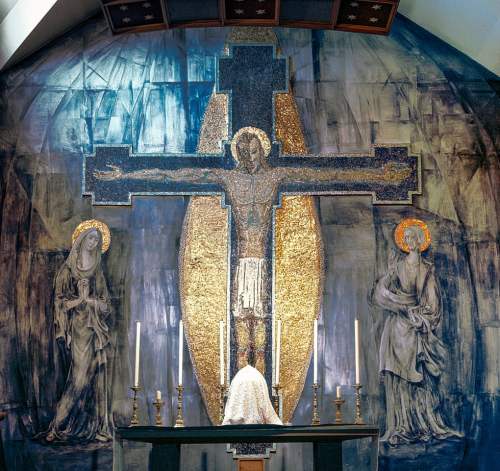 A disused 1950s brick-built church languishing behind metal fencing in one of the most deprived areas of the country is not a place anyone would expect to find an art treasure. But taking up an entire wall inside the Holy Rosary church in Oldham – and at increasing risk of being lost for ever – is a rare mural by a leading 20th-century artist.

Now a campaign to save The Crucifixion by George Mayer-Marton, who fled to Britain from Austria in 1938, is gathering pace with an application to have the artwork listed amid concerns that the building will be demolished or redeveloped.

Save Britain’s Heritage has written to Historic England, the body that recognises and protects historic buildings and sites on behalf of the government, urging swift action to save the mural. A decision is expected before the end of the year.

Meanwhile, two conservation reports that were commissioned by the artist’s great-nephew, Nick Braithwaite, have concluded that magnolia emulsion painted over the fresco part of the mural could be safely removed to restore the artwork to its original state.