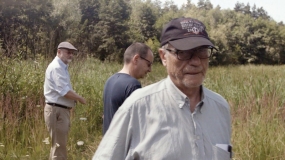 The subject of the holocaust is a difficult one to discuss on film, not least because so much has been done on it before. Human rights lawyer Philippe Sands’s latest feature, My Nazi Legacy, alternatively titled A Nazi Legacy: What Our Fathers Did, begins as a fairly standard effort, with archive footage, moody music and a slightly monotonous voiceover. The subjects are two men in their 70s, an Austrian and a German, who are the sons respectively of Nazi war criminals Otto Wächter and Hans Frank. Both were key architects of Hitler’s policies throughout the eastern part of Germany, collectively responsible for thousands of deaths. Horst von Wächter and Niklas Frank are interviewed over a series of months about their fathers, families and lives during and after the war.

The film gains a real hold, however, when it becomes apparent that a rift is growing between the two men. Niklas becomes increasingly uncomfortable with Horst’s determinedly rose-tinted view of his father, who was known by some as “the butcher of Poland”. Niklas condemns his own father for his crimes and for his lack of paternal affection, while Horst firmly believes that von Wächter was good inside and had little idea over the atrocities being committed under his command. He pities Niklas, saying that he is an egomaniac whose “life is practically annihilated by his father”. The fascinating difference between two men with such similar backgrounds becomes the documentary’s most interesting element, with Sands’s increasingly difficult relationship with von Wächter adding an unusual tension not seen in the average history documentary.

[My Nazi Legacy is released in select cinemas on 20th November 2015.]