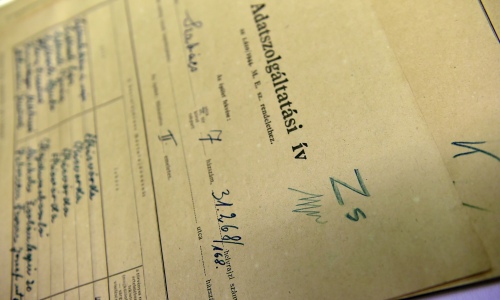 A vast and historically valuable trove of Holocaust-era documents, long thought destroyed during the second world war, has been found hidden in a wall cavity by a couple renovating their Budapest apartment.

The haul of 6,300 documents are from a 1944 census that was a precursor to the intended liquidation of the Hungarian capital’s 200,000 Jews in Nazi death camps.

Brigitte Berdefy, co-owner of the apartment overlooking Hungary’s parliament, said in August a worker detected paper after jamming a screwdriver through a crack in the wall.

But then her husband Gabor peered through the crack and saw what looked like handwriting.

Carefully removing each brick, the couple eased out around 61 kilogrammes (135 pounds) of dusty papers, many with bits of plaster caked on, but all more or less intact.

Filed under Holocaust in the news, Other primary sources (not Yiddish)